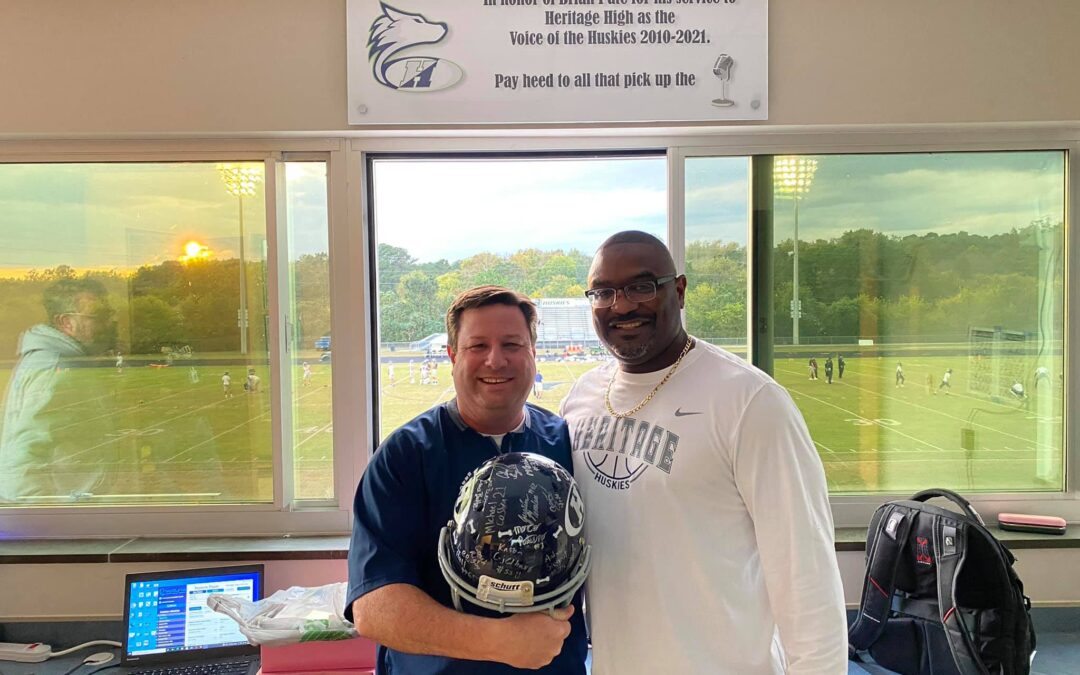 Please bear with me for this one as I leave the real estate discussion to discuss something on a personal note.

On Sunday night, July 17, 2022, I received a call that would change my life. The call was from Pat Kennedy, the athletic director at Heritage High School. He called to inform me that “Coach Johnson” had died.

I was in such shock, I had to call him back and say, “You did say Coach Johnson, right?”  He confirmed.

Immediately, my eyes swelled and tears began streaming down my face as I tried to find the words to inform my wife. He was truly a wonderful man whose life ended way too soon.

Charles Johnson died after being found at the Hampton Inn on Spring Forest Road in Raleigh, North Carolina. Raleigh Police are still investigating the death after doing a welfare check when the occupant did not check out of the room. Raleigh Police spokesman Jason Borneo said there was no sign of foul play and it remains an open and ongoing death investigation.

I first met Charles Johnson when I was the PA announcer at Heritage High School. As a former NFL wide receiver, he was helping to coach the football team at the new school. Our first meeting, he told me he had played at Colorado in the Big Eight Conference. Having gone to school for one year and participating with the football team at the University of Oklahoma, we gave each other a hard time constantly.

This guy was full of energy and I never saw him without a smile on his face. He LOVED working with the kids and they loved him. He was someone that just brought a vibe into the room with him and I have heard from his former teammates, that he had always been that way.

Over the years, our friendship grew. I adored watching him watch his son Charles Jr. and his daughter Cydney play their respective sports. Charles Jr was a standout wide receiver for Heritage High in Football and also played varsity basketball. His daughter was an all conference basketball player and is entering her senior year on the High Point University womens basketball team.

We spent many nights closing up the facility after a ball game and talking strategy on the field. When you get the perspective of an NFL guy, it changes how you watch the games and he helped me become much more knowledgeable about the game and how it is played.

His accomplishments on the field were numerous. He attended Colorado from 1990-1993 and still holds the school’s all time single season mark for receiving yards with 1,149 in 1992. The career total of 2,447 yards ranks sixth all-time at CU.

His most memorable performance was a game in 1998 against the Tennessee Titans when he caught nine passes for 113 yards and three touchdowns along with two 2-point conversions.

Johnson then played two years with the Philadelphia Eagles before going to the New England Patriots. While with the Patriots, he won a Super Bowl ring in 2001. The Patriots were an upstart team that year with a QB named Tom Brady. The Pats beat the St Louis Rams in the Super Bowl that season.

His last professional season as a player was in 2002 with the Buffalo Bills before he retired.

That team had future NC State stars Thayer Thomas and his brother Drake, as well as Ricky Person, Jr. (now with the Baltimore Ravens) on it and was the high point so far in the short history of the Heritage High program.

In addition to his football duties, he served as the Assistant Athletic Director at the school until his retirement in December of 2021. In that role, he would oversee all of the activities for basketball and all of the other indoor and outdoor sports along with AD Pat Kennedy.

He was never a guy that would go out on the autograph circuit, yet he never refused to sign something when people would show up while we were together.

At the end of the 2021 football season when I retired from announcing at the school, I arrived with my wife at the stadium. It was the last game of the season and we were playing one of our conference rivals so I arrived a bit early at the urging of my wife. Little did I know she was in on it.

When we arrived at the press box, Charles was there to greet us with that big smile he always had. He told me to follow him and I did. He presented me with a helmet signed by all of the seniors on the football team that still sits in my office today. He then unveiled a sign honoring me for my contributions to the program. I won’t lie, it brought me to tears and I gave him a big hug. We posed for some pictures and then we had to get to work because there was a game to be played.

He could not have possibly known the number of lives he touched with those kids and their parents. It is a big loss for our community and those of us that got to know the off the field version of Charles Johnson are eternally grateful for the opportunity.